On that day in 1908 two outlaws Butch Cassidy & the Sundance Kid were allegedly killed in Bolivia. Speculation still remains if the two had actually survived and made it to old age.

Despite the mystery on Tuesday, November 7th we’re asking you to play a game of one-night-stand or husband between the two and ANYTHING you buy that day is 25% OFF! 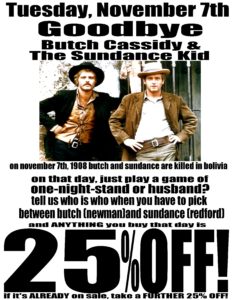