Two celebs to celebrate this Tuesday! Charlotte, daughter of wrestling legend Ric Flair, is a bad bruising babe turning 30 this year. But how would she perform in a no holds barred cage match against our other birthday, the legendary Bette Davis, who’s enduring toughness and film legacy is no secret to anyone. “Until you’re known in my profession as a monster, you are not a star,” says Bette Davis, from her dressing room…… Let our cashiers on Tuesday know who you think would win in a fair fight, and receive a whopping 25% off for your response! 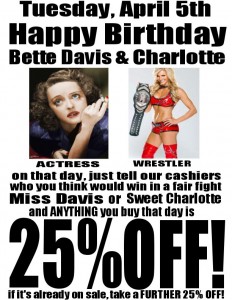