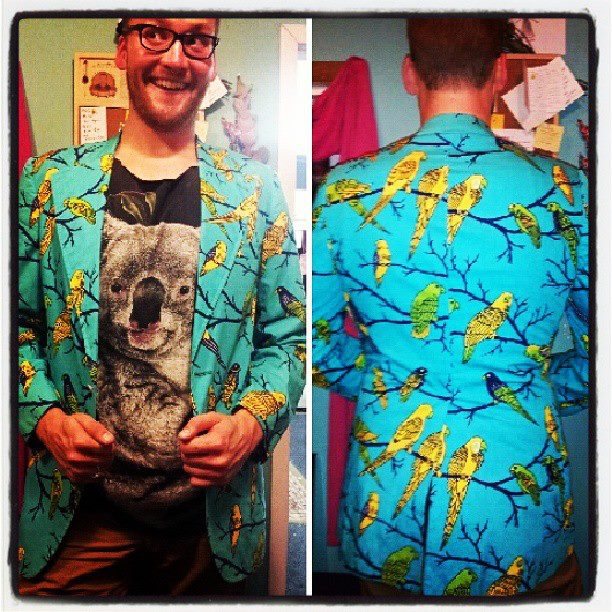 Bank Mike: So, Brooks, your last day is today.

It’s been a while.

How did you get involved with Philly AIDS Thrift?

At first I wanted to volunteer at a couple of different spots in Philly to become a part of the community. And some friends said they knew this place was volunteer based, so before I even know about it as a thrift store, walked in, went to the front counter and said “Can I have an application? I hear you’re volunteer based.” And they took my application and I heard back from Christina shortly after that. I started right away.

So how long was it until you started working here?

It was six months into my volunteering that they were looking for someone to work here. Catherine who was the full-time clothing processor was going to law school so they looked for someone to split her full time hours with her. So eventually I became the full time clothing person. I was the only one working here until I went on tour for the first time and Tina was hired to replace me while I was away.

“On Tour”? Tell us about that.

I was in a band as well for the five years I worked here called “Dangerous Ponies.”

What instrument did you play?

I played the keys, the tambourine and I played an ice cream cone shaker and I sang backup and danced around. I
was known mostly for my hype dancing and demonstrating.

So what’s a typical day as a clothing manager? 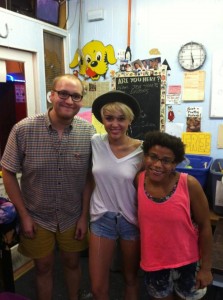 Well, it entails all the same things I’ve been doing for five years: volunteer organization, delegating tasks for clothing, specifically. So having them tag, having them hang, having them put stuff in the store on a rotation which is necessary for us to sort through clothes. It also entails sorting through donations we get, pricing vintage clothes, pricing shoes, trying on dresses for drag.

What’s your favorite thing about being the clothing manager?

Manager specific? I guess bragging rights about being here the longest.

You were talking earlier (during the first interview we tried where my iPhone didn’t record) about the how the voucher program was good for that. Can you talk about that again?

Sure, well it’s really great to see the people who come in here, people who have been infected who need help financially–whether they lost their job or their house or they just got out of jail–they can come in here and be able to shop as any other customer would, without stigma but with a voucher for $25.

It’s really great to see them in the store shopping for their own items instead of them having a van pull up to their house and give them whatever they may be able to give at the moment. I don’t think there’s anything wrong with those programs, but I think it’s better to get these people out and about celebrating life, still.

So being with Philly AIDS Thrift for five years, you’ve seen us in our early days. What was that like?

For sorting clothes specifically, there was a room built in the back of the warehouse [our old furniture warehouse on Bainbridge St] out of planks of wood and sheets.

Haha, it was terrible. It was amazing in it’s own regard. “Charming,” as I like to put it. In the summertime it was extremely hot. You’d have two fans blowing on you with the garage door open and you’d still be sweating. You felt like you were in the womb. And in the winter you’d be wearing two pairs of socks, long johns, pair of pans, t-shirt, shirt, sweater, jacket, scarf, hat, fingerless gloves with two space heaters on you’d still be freezing because apparently winters in Philadelphia are awful. So whatever the temperature was outside, it would lock into the warehouse.

And then there were avalanches…

Right. And the avalanches from the pile of clothing donations collapsing upon you.

What was your favorite moment or biggest accomplishment at Philly AIDS Thrift?

I think it would have to be the last minute trip Christina and I took to New York. We were nominated for a vintage shop award by Racked blog, which is a fashion blog out of New

York and we were nominated for best vintage shop out of all the other vintage shops in Philadelphia. We didn’t end up winning but it felt like such an honor. It was a really great way to celebrate us being more than just a thrift store, being more than just an HIV/AIDS non-profit organization, but a well respected place where people respect the things we do, our vintage department, our clothes.

I wish that I tried to get to know more volunteers on a personal level…getting to know some people who worked downstairs [the processing room is on the third floor] and even customers who are here as often as some are. 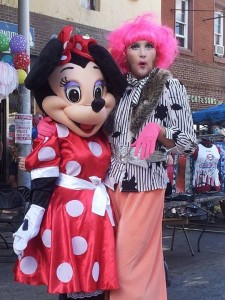 What will you miss most about Philly AIDS Thrift?

I’ll definitely miss the community the most. They’re like my family for the last five years. This has been my home away from home for the last five years. Not only the people who work in the store, the volunteers, but the community I’ve been doing this work for. And for now, it is difficult to be leaving that community, but I hope to be doing non-profit work for the rest of my life.

What’s next for Brooks?

Well, I hope to street perform in New Orleans. I hope to perform in general. I hope to start volunteering immediately, whether it’s at a dog pound or a textile spot. I’m sure there’s HIV/AIDS organizations I can become involved with. And finding haunted mansions.