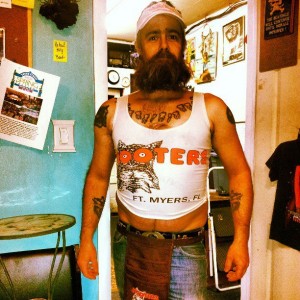 Doesn’t it suck that there’s like three different ways to spell it?

Yeah, it does. I wish it were spelled like Shaun Cassidy…

Do you shop, donate or volunteer?

I am staff…but I do all those things.

How long have you been coming to Philly AIDS Thrift?

I want to say my taxidermy frog.

So it’s not that globe lamp you

tried to take from me?

No, that’s the second coolest thing, but not as cool as the taxidermy frog.

What keeps you coming back to our store?

The way it makes me feel involved in the community I live in. I get great satisfaction in meeting and knowing the neighborhood and the customers and the people we get to help. I feel very lucky in that.

What’s the #1 top played song on your iPod?

What are you OCD about?

Being on time. I’m two hours early to the airport every time. I’m obsessive about being on time, it drives my girlfriend crazy.

If you were a Mexican wrestler, what would your stage name be?

Make sure you spell that right. It’s with a Q.

Have you ever won a contest?

I beat everyone at longest keg
stand at a party once. I promptly puked afterwards. 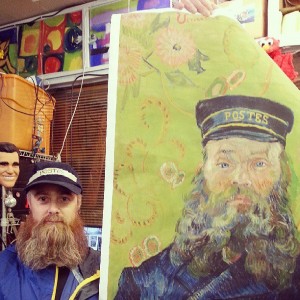 Did you win anything?

More beer. The respect of my peers.

You have a pretty cool beard, how long have you been growing it?

Since the fifth of December. I’m trying to go for a whole year but I don’t know if I’ll make it. It really itches.

As a follow-up question, what is growing in your beard?

Probably an almagonation of hot dog bits, baby barf and hahaha I suspect bits of pasta. Definitely pop tarts. Those are the last few things I’ve washed out of it, anyway.