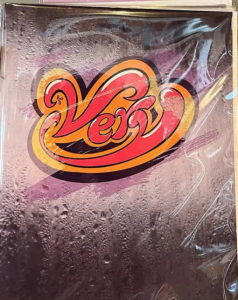 Stevie Laney is a Philadelphia muralist, painter, and volunteer, who you can find helming the registers at the Philly AIDS Thrift. Visitors may recognize her Grace Jones mural, which she recently completed in-store. She has also painted the exteriors of a number of storefronts in and around Queen Village, including Gerber Accounting & Tax Services, and the South Street Art Mart, where she works full-time.

How did you first get involved with Philly AIDS Thrift?

STEVIE LANEY: I love thrifting. So in California, it’s really easy. There’s ton of thrift stores out there in San Francisco. But in Baltimore, not a whole lot. So when we came up for the visit, I was looking at stuff to do. And I found it, just by chance. I came in here and, immediately, it was like, this is one of the reasons I wanted to move here. I got accepted to a post-baccalaureate program here. So, I had like two reasons to be here: I wanted to go to school again. And I loved this store.

What resonated with you on that initial visit?

STEVIE LANEY: There’s a personality here. Walk in, and you immediately feel like there’s a vibe. Everyone who works here is great.

What’s the story behind the Grace Jones mural? 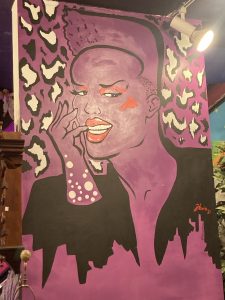 ​​STEVIE LANEY:  Grace Jones has this androgynous look. I just find her so interesting, in general. And I felt like that funky look that she kind of just went with the vibe here. It was fun to paint.

Tell us about your magazine.

​​STEVIE LANEY: The first issue is just my work. So it’s all illustrations and paintings. The second issue will be coming out in April. It’s going to be published quarterly. And that’s going to be a collaboration. I’ve got some friends who are going to be putting artwork in with photography, and some poetry and stuff.

​​STEVIE LANEY: I’m keeping it as artsy as I like. You can take photographs, and get people to pose, model, you know. And there’s a lot more of that happening now, where there are more inclusive body types and all that. But I wanted it to be a little bit more traditional art, and less just photography. So I will have friends, who are making it a collaboration. I think that’s also a big part: you get local artists who do this type of work, but it’s not always easy to show.

So this is an outlet for people who may not have many other outlets?

Because it’s flagged as pornographic?

​​STEVIE LANEY: Yeah, I’ve been flagged a few times. I posted this painting of Jerry Lewis and Dean Martin. And it was a picture. I used an actual photograph of them in a shower naked. I saw that. And I could not stop thinking about that picture. So I’ve made a painting of it. And nothing’s happening in the photo. They’re just standing there. And I posted that, and I came very close to losing my Instagram account.

It’s not even a pornographic image! Just two buddies in the shower!

STEVIE LANEY: Exactly! So that was one of the reasons that I like tangible things. It’s hard to show things on Instagram now without getting worried about getting kicked off, losing all your followers, and trying to rebuild yourself. And with Very, the cover is very discrete.

STEVIE LANEY: So I wanted something catchy and discrete. I brainstormed a lot of different ideas. But Very just struck a chord with me. I thought that was nice, and simple. But also it says a lot.

It’s one of those names that seems unassuming. But the more you think about it, it sort of blossoms.

So where can people find Very?

​​STEVIE LANEY:  At the South Street Art Mart, and Giovanni’s Room, and my website, www.stevielaneyyart.com.